Civic Society news and events
in Barton upon Humber
since 1969

Welcome to the Barton upon Humber Civic Society website. In the following pages you will find more information about the activities of the Society and its values. You will also be able to keep up to date with latest news and events.

Find out more about us

The pubs and breweries of Barton upon Humber, Barrow and New Holland

Civic Society member Paul Gibson has produced a new comprehensive website about our local pubs and breweries, past and present. For everyone who is...

Barrow upon Humber High Street is one of the finest in North Lincolnshire with many examples from the Georgian and early Victorian period. The streets...

The Ropewalk team were delighted to be approached by North Lincolnshire Council Museum Service to support weekend opening at Barton Museum, Baysgarth House this summer. From July 3 to August 29 the two downstairs exhibition rooms will be open to the public with Barton Volunteers on hand to talk about the exhibitions. In one room there will be some of David Lee’s wonderful photographs of the Humber Bridge along with reminiscences of people who worked on the bridge construction. In the second room North Lincolnshire Council Museum Service is asking people to come forward with their memories of Barton Carnival. Bring old photos along to be scanned and added to the exhibition; help name the faces in the pictures to build up a really good record of Barton Carnivals past. As the show will be added to each week it will be worth coming several times to see what has been added.

I dug this picture out from 1998 when Pete Davis was the Mayor of Barton and he drove at the front of the parade with wife Cath in their stunning car. Liz Bennet

A part of the history of Hall’s Barton Ropery now occupies pride of place in The Ropewalk’s Museum Corridor.

The Wire and Rope Board has been gifted to The Ropewalk by the family of the late Capt David Peter Matthews who, after a career in the Merchant Navy, worked at the Yacht and Commercial Rigging Company in London. The company was a customer of Hall’s Barton Ropery and the Board was used as a visual aid for marketing to explain the various types of wire and cordage to customers.

When Yacht and Commercial Rigging moved to Doncaster, the Wire and Rope Board was given a new home at the offices of Kim Products, the yacht chandlers in Redhill, Surrey, that Capt Matthews had founded.

Kim Products produced a range of rope and webbing harnesses for use by yachtsman and the Coastguard. These included helicopter rescue strops and the safety harness used by Sir Francis Chichester during his solo circumnavigation of the world.

The Wire and Rope Board remained there until the company was sold in 1996, and it was moved Capt Matthews’ home. His widow moved out of the family home in 2021 and the Board finally came home to The Ropewalk, thanks to Gill and Lindsey Dear for transporting it from Surrey, some 70 years after it had left.

Find of the week 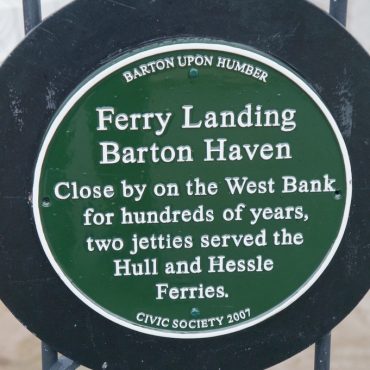 The Ferry landing plaque at Barton Haven commemorates the ferry service that connected Barton to Hull for hundreds of years.